When was the first Easter card sent?

According to Wikipedia people sent the first Easter cards just over 100 years ago at the very end of the 19th Century. At this time people tended to send postcards. Initially you could only write the address on the back of the postcard, along side the stamp. Postcard senders had to write on the front meaning that the illustration had to allow space for the writing. This changed in the early 1900s when the back of the postcard was split more like we see today.

What sort of cards did Victorians send?

Early images on Easter postcards and cards included the Easter bunny, sheep, flowers, eggs and often young girls who were a symbol of luck and hope. Easter carries a message of hope and new life so now we also might include butterflies and spring images, particularly in the Northern Hemisphere where Easter and Spring coincide. In Australia you might find an Easter Bilby instead of a bunny.

Where did the Easter bunny come from?

It’s generally accepted that the Easter bunny originated in the 1700s in Germany. He was originally an ‘egg-laying hare’. German Lutherans took the tradition to America with them. Then, like so many things, once the Americans are doing it, we’re all doing it!

What are Easter cards all about?

There’s no doubt that Easter cards have their origin in Christianity. Relating to Jesus’ resurrection and the hope of new life, this is where most of our Easter images have their basis. It’s understandable that Easter cards were at their peak during the First World War. Then also the Second World War as people faced life and death situations and an uncertain future. Following the Second World War Easter cards declined and fewer are sent now than then. However, they are still very popular. With Mothers Day just 3 weeks before Easter it’s interesting to note that Mothers Day is the third largest card sending occasion in the calendar year, with Easter in fifth place.

Why send an Easter card?

Whether you are a Christian or not, sending any card at any time can lift someone’s spirits. There is a reason why the Greeting Card Association has as it’s industry tagline ‘send a card, deliver a smile’. That’s exactly what sending a card can do. While Easter may move its date each year it will always fall in Spring here in the UK. After an often cold, harsh winter here in the Outer Hebrides I know I love to see cards with flowers, animals, butterflies and eggs, heralding a new season with summer not far away.

Whatever your faith or none, an Easter card can bring hope and encouragement in tough times. Or perhaps just a reminder of what a beautiful world we live in.

So go on, make someone smile and send a few Easter cards this year!

If you’re looking for other ideas for Easter then I’ve made some suggestions here.

If you’re a busy person who’s a bit short of spare time to choose some Easter cards then I’ve put together a bundle for you. 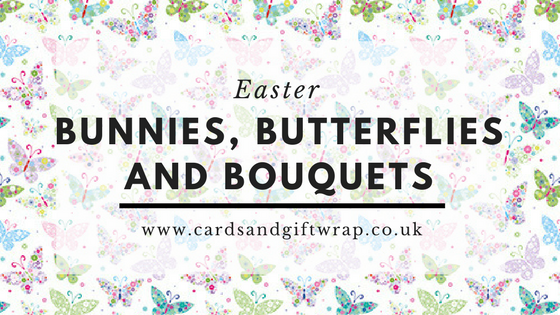 Easter isn’t very far away so I’ve picked out a couple of Easter cards, gift wrap and gift ideas below. If you’re a busy person struggling to find time to order cards then how about an Easter/Spring bundle?

Choose ‘Easter’ when you order a mini box here

I love this card, it’s glittery and just so pretty. Butterflies can symbolise hope, life, transformation…all things that our mothers give to us. Lots to be grateful for.

A beautiful flittered design with a tree of eggs. This card is also flittered (glittered) with eco-friendly, vegetable based, non plastic glitter!

Easter isn’t complete without bunnies and these two might be the cutest pair of fluffy bunnies you could send to someone.

Possibly the sweetest card you could send this Easter to a loved one or someone special. I think this would be the perfect card from a grandparent to a grandchild.

Whichever card you choose, you’ll be sending an exclusively designed one that will make someone say, ‘wow, thank you that’s beautiful’. If you need gift wrap to go with it then there are some gorgeous Florals ones from Flamingo or the Flowers and Stars, that also has matching gift tags. (All Flamingo gift wrap and tags are 100% recyclable)

If you’re looking for gift ideas then you might like the colouring in garden poster. This would be a great gift or holiday activity for all ages. Some of the illustrations are detailed enough for the expert ‘colour in er’ while they will still look good after some embelishment from little hands too.