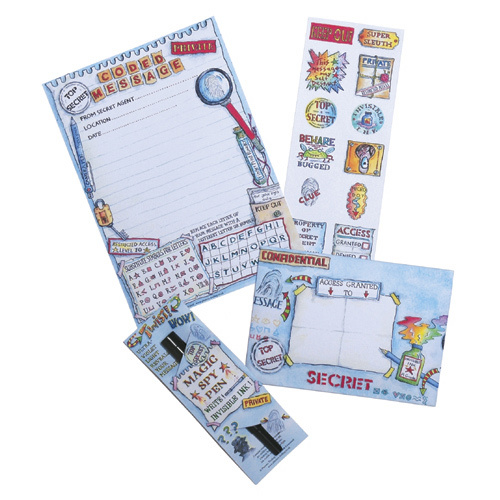 How to organise a spy-themed children’s party

For your eyes only: here’s the perfect blueprint for a spy or secret agent-themed extravaganza – from the invites through to the party bags <taps nose>

(Or use our secret agent kit, the paper is just perfect for this…

…comes with stickers and matching envelopes and you could even write your invitations in code!)

Recommend guests dress up to fit the theme

“We also got the children to add their fingerprints to the cards using an ink pad.”

All spies need a secret mission, so get creative dreaming one up

A spy-themed treasure hunt with plenty of clues will guests occupied for a while.

Test your spies’ stealth with large games of sardines or hide and seek.

Laser beam maze: create a course of ‘lasers’ down a hallway with red wool or streamers zigzagged from wall to wall. The children have to get from one end to the other without touching a beam. “We put the tea table at the other end for an added incentive!”

Test the kids’ spy instincts by blindfolding them in turn, and getting them to guess who is standing in front of them just by touch.

If it’s a warm day, hand out water pistols or water bombs and send guests outside for a shootout – or get them all involved with target practice.

You can also give well-known party games a new twist:

Cover a rectangular sponge in icing to make it look like a briefcase. Add other spy accessories made out of icing.

What to put in the party bags

Stock up on cheap gadgetry for the ultimate spy kits:

And of course, a slice of cake (for sustenance on long missions!).

Secondly you’ll need food and I’ve put some ideas on my Pinterest site but anything with honey is obviously a must! I’ve put a couple of ideas for activities and games on there too, love the idea of pin the bowtie on the teddy! Finally, you’ll need to send a thank you card, and this by Paula Bowles is probably my favourite, just because it’s so cute!