Ever wondered how Flamingo Paperie find their artists? If you have ever thought your work might look good on a card then you’ll be interested to know that it’s Artists Wanted time.

Flamingo Paperie artwork is a real mixture of fun, contemporary and fine art. It’s difficult to say exactly what they are looking for because trends and fashions change. The easiest place to start might be to look at our current range to give you an idea.

Or see my latest video with a snapshot of the Christmas range from 2017.

How do I submit my work to Flamingo Paperie?

You can post your artwork to them at Artist Submissions
Flamingo Paperie
60 High Street
Wimbledon Village
SW19 5EE
Or you can email robin@flamingopaperie.co.uk.

Flamingo Paperie will consider ‘paper’ copies of artwork or digital artwork. Though I know first hand that the creative director loves to receive ‘real’ artwork through the post!

What happens after I’ve submitted my artwork?

Once you submit your artwork to Flamingo Paperie, they will send feedback on whether they think your work is what they are looking for. If you are successful then Flamingo Paperie shortlist your work on to a survey that the creative team get to vote on!

So get out those paints and brushes, go on – give it a go! Or pick up the phone and get that artist friend of yours to send her work in. Tell Flamingo I’m the one who told you that there were artists wanted and when you let me know that the artist is successful, I’ll send you something to say thank you. Good luck, hope to see your work in the next product survey!

If you’d like to know more about our current artists then take a look at the artist profiles of Alison Vickery, Alison Hullyer, Julia Rigby and Amanda Loverseed.

Who came up with Christmas cards?

Which country leads the way in greetings card design?

How much money goes to charity from Christmas cards?

What’s the average cost of a greetings card?

Answers to the above and more in my latest video – Did you know?

(I thought this was fascinating, a friend shared it via her FB page Barefoot in Belfast, she sells gorgeous children’s books by the way, and I thought with all the romantic poems we often write in cards it was interesting to see what happened to thee and thou, this is only part of the article, see the link at the end for the full thing, well worth a read!)

We know language changes—we don’t say thee and thou anymore—but have you ever wondered why? Often, it’s not clear, but there’s a particularly satisfying answer when it comes to these two pronouns.

A couple of weeks ago, after I talked about how the pronoun you fills so many roles, I started wondering why we stopped using thee and thou.

It turns out that English used to have formal and informal pronouns like many other languages. German has Sie and du, French has vous and tu, Spanish has usted and tú, and during Shakespeare’s time, English had thou and you and thee and you.

Thee and Thou Were English’s Informal Pronouns

Since thee and thou have survived mainly in religious and poetic writing, you may be surprised to learn that thee and thou were the informal pronouns. Yup. You was formal, and thou was informal.

In a book called The Personal Pronouns in the Germanic Languages, Stephen Howe says that in the fifteenth to sixteenth centuries, thou was generally used to address someone who was socially inferior or an intimate. For example, parents called their children thou, and children called their parents you, but then the use of thou sharply decreased in the seventeenth century, starting in London. Thou was used the longest in areas that were farthest from London, and in fact, it’s still used in a few regional dialects including those in Yorkshire and Cumbria, which are both quite a bit north of London.

The reason people stopped using thou (and thee) was that social status—whether you were considered upper class or lower class—became more fluid during this time. You had social climbers striving to talk like the upper class, so they used you all the time instead of thou, and since you couldn’t be as sure as you used to be about who was in what class, it was safer to use you instead of thou because you didn’t want to risk accidentally offending someone in the upper class by using the wrong pronoun. You didn’t want to call someone thou when you should have used you!

via Grammar Girl : Why Did People Stop Saying “Thou”? :: Quick and Dirty Tips ™. 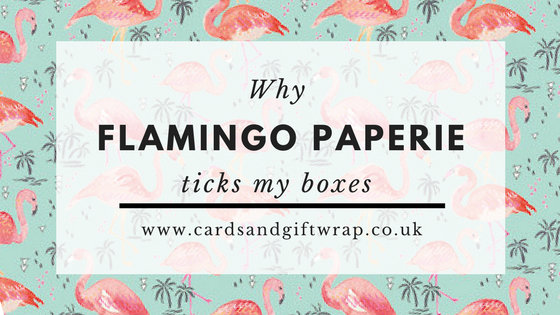 The UK card industry is huge and growing. Despite what you might think, “that no one sends cards anymore because we all just Facebook each other”, the Greeting Card Association UK (GCA) reports that sales of greeting cards are actually increasing! In fact we spend more on cards than we spend on tea and coffee put together!

I am passionate about giving something back. Having previously worked in areas like Darfur and Sierra Leone I cannot escape the reality that I am hugely blessed in life. I don’t believe in just giving handouts. On the whole these don’t better someone else’s circumstances. But giving people the tools they need to take control of their own lives and situations – that’s worthwhile. Flamingo Paperie as an organisation always looks to share their success, to give out, not keep it all to themselves. The people who run it have done this since they started as the company, Phoenix Trading in 1995. All our Christmas cards are charity cards. Some of my team donate all their profits to charity, and I love to help people raise some extra money for their cause, be it their Scout group or their local hospice.

I’ve done the working for a big company and having to work overtime to make more money for shareholders with no personal gain. I’m through with that! Anyone with children will value flexibility in life as planning even a day can all go to pot with a sick child, a well timed nappy change, an unexpected nap (from the child not me…though often I wish!). Working from home and being in charge of my tasks and goals, with no one saying “I know it’s tough and we don’t want to push you over the edge but we do need you to work the overtime” (as a previous boss said to me after I had disclosed that I had depression and was struggling to make it through each day), is a key reason why Flamingo Paperie is best for me and my whole family.

What is flitter? Why do I go on about it so much? Flitter is that wonderful stuff also known as fairy dust or magic sparkle that people sometimes mistake for the poor imitation that is glitter. Many of Flamingo Paperie’s cards are flittery – and at no extra cost! If the cards aren’t flittered the illustrations are still stunning. When I first became an independent Phoenix Trader I thought I might send them some of my designs but I’ve since been privileged to see some of the original artwork and, no – I won’t be sending mine in. The artists who illustrated for Phoenix Trading and now Flamingo Paperie are in a league of their own…if you are in that league you might want to look at the info for artists.

Sorry can’t get away from it…I’ve tried to eat less of it but there’s no getting away from the fact I love cake. Flamingo Paperie Partners eat a lot of cake, drink a lot of tea – and when we can we love wine with our cards too. Being a Flamingo Paperie Partner is about people. Whether it be listening to what someone wants out of their business, seeing how I can support someone with fundraising or helping someone choose the right sympathy card. These conversations often happen over a cuppa and if possible a slice of cake. I’m not fussy what kind of cake, any will do!

These are my reasons for today and probably in today’s order why Flamingo Paperie ticks my boxes.

They might change because being an independent Flamingo Paperie Partner means I can be flexible like that. If you’d like to find out more do get in touch. I’ll be happy to send you some information with no commitment on your part. Except possibly the requirement to eat cake if you come to a team meeting. But as I say I’m flexible – you choose how big a slice you want! 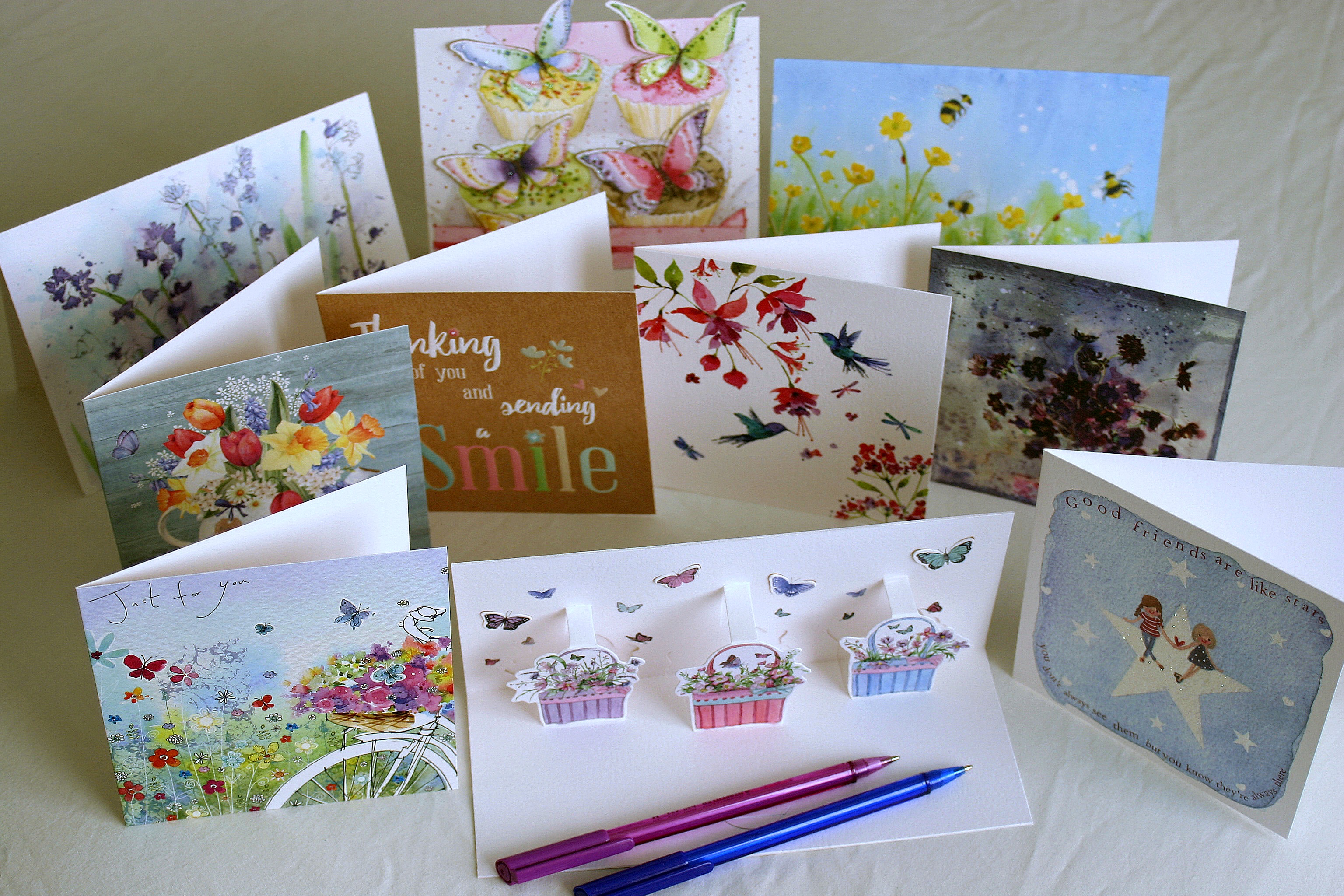 Have we lost the art of handwriting? I hope not. With social media being a part of our lives that it never was when I was young I see changes in what we teach our children. Quite rightly they learn how to touch type on a qwerty keyboard from an early age. But they still have their handwriting book too. How important is handwriting in a technical age? Does it matter anymore?

Despite the common perception that ‘no one sends cards anymore’ the opposite is true. According to a recent survey 95% of British households still send cards. So surely it’s important that what’s written in them is readable? Or is it?

I did a little research on the lost art of handwriting.

This article on The Art of Handwriting about letters by artists is worth a look just to see the handwriting. I’m not an artist so my handwriting leaves a lot to be desired but I just adore neat, artistic handrwriting.

Here is a very inspiring TED talk on the lost art of handwriting – you might be inspired to pick up pen and paper after listening to these shared memories.

Now, going back to my earlier complaint about poor handwriting, there might be an answer in this. A hi-tech pen that could improve my handwriting!

…and if you’re still not sure you need to bother brushing up on your handwriting then this 8 year old has a very good reason why it’s important – how else will he fill in his contract to be a major league player?!

So, is the art of handwriting important or not?

Does it matter if my scrawl looks pretty or is it enough just to be readable? It’s a well known fact that sending handwritten cards and notes has a positive impact on someone’s mental health. So perhaps I shouldn’t get too hung up on how good or bad my handwriting looks but worry more about if I am writing enough. After all the only way to improve my handwriting is to practise, practise, practise. I no longer have a handwriting jotter like my children at school so perhaps my best practice is to send more cards and letters.